A bedroom like no other was always on Kate Lane’s wish-list and the view from her bed is certainly out of the ordinary.

At night, Kate gazes up through a long narrow skylight framed by ornate cornices that were once on the exterior of the now-restored Mt Eden Borough Council and fire station building. It frames clear starry nights, full moons and stormy skies.

“People might think, ‘Why would you want to have that detailing in this particular spot?’ It really makes the room,” she says.

Kate’s apartment is in the penthouse level of the building, and she’s discovered there’s one disadvantage to being in such an elevated position.

“When I first moved in, someone down the road said, ‘Just so you know, my neighbour says they’ve often seen Marc wandering around in his towel up there,'” Kate says with a laugh.

Marc is her Wellington school friend, former All Black and entrepreneur Marc Ellis.

He was the first owner of the heritage apartment, which he bought following an extensive $15 million refurbishment of the building in 2016. It was transformed into six luxury apartments by Templeton Group, led by project director Nigel McKenna, and A Studio Architects.

The apartment’s pièce de résistance is the arched former council chamber, which is now Kate’s living room. The vaulted ceiling was restored to its full 4m height, the plasterwork, ornate columns, moulded dado and picture rails were reinstated, and original timber windows refurbished and reglazed.

It was the splendour of the building, and particularly the former council chamber, that caught Kate’s eye and heart. “I’ve never walked through a house with my jaw on the floor in the same way. The scale of it, the care they’ve taken in its history, the light, the view – it all blew me away.”

Although Kate knew Marc, she went through a nerve-racking tender process where buyers gave confidential written offers to the agent, which she won. One year on, she’s relieved she quickly abandoned plans to renovate her Herne Bay villa to move into this lock up and leave apartment.

“I had never really known what people meant by lock up and leave, but it’s absolutely that. I go away a lot for the weekend because my partner lives in the Coromandel. I can walk out Friday morning, come back on Sunday night. It’s a really easy home,” says Kate, who is a partner at an Auckland law firm.

Kate is an avid entertainer. One of her first soirées was drinks for the locals. She knew most of them well, and all were eager to see inside the landmark building.
“I was a bit nervous. I’d lived in Herne Bay for a long time and I thought, ‘Am I going to have any friends in Mt Eden?’ not really realising it’s only 15 minutes away. It was fun because I didn’t necessarily know all the people very well.”

There was plenty for the new neighbours to admire. Kate collects contemporary art, and some of her pieces have made their way into the building’s shared spaces.

“Because the walls are so beautiful, a bit like a gallery, I haven’t got room to have all my artwork hung,” she says.

A Gordon Walters print hangs on the landing. “Although art is a very personal thing, most people appreciate a Gordon Walters,” Kate says. A Seung Yul Oh mouse sculpture was also placed on the landing to greet visitors for a party, and that’s where it has stayed.

“I was planning to bring it back inside, but my neighbours said that their grandchildren really loved it,” Kate says.

Art is hung sparingly, but it’s everywhere; not only on the walls of the grand living room but even in the cupboard-like laundry.

“I did sell quite a lot of art when I moved in. You know, the Marie Kondo, ‘do I really love this?’ thing. Some things stay with you forever, and other things catch you for a while then it wears off.”

Kate’s favourite piece is the portrait she commissioned Trenton Garrett to paint of her mother. “When my dad died, I was very young. She brought up five of us by herself. She loves the garden, and she likes the painting, although she doesn’t like her hands.”

“You could be old here, and it’s not in every house you could,” Kate says. “That’s the first time I’ve been able to say that.”

THE CHAMBER’S HISTORY
When Mt Eden became a borough in 1906, the Mt Eden Borough Council commissioned Wade & Wade architects to design the double brick and plaster building, which was opened in 1913 by Mt Eden mayor Oliver Nicholson. It was enlarged on its western side (the site of Kate’s bedroom) in the 1940s.

The adjoining fire station, built in 1924, was designed by Australian-born architect A Sinclair O’Connor. During the 2016 renovation, a glass atrium was added to link the two structures.

The apartment conversion of both buildings was completed in 2016 and involved extensive repair and strengthening work. The removal of a maze of walls and false ceilings revealed hidden fireplaces, kauri floors and the council vault.

To see other property developments by Templeton Group’s CEO Nigel McKenna, take a look at our portfolio. 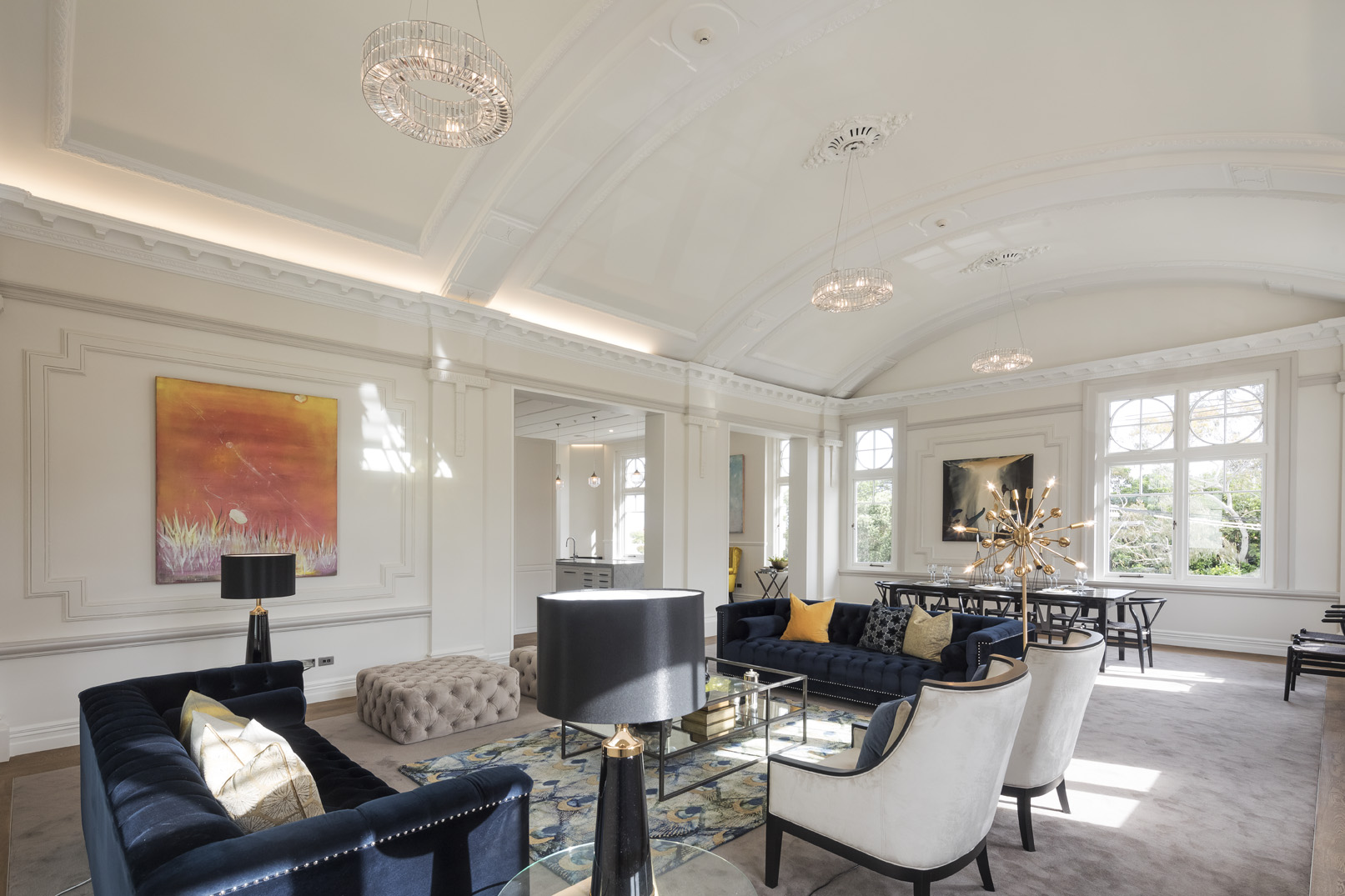